Finally back to Stashbustin'. It's been a longer break then I intended.

This dress had been waiting to be hemmed for some time. I am still unsure of whether I should shorten it a bit more. If I would wear it mostly with tights then yes, but in reality I am most likely to wear it without, it being Queensland and all, and then I probably don't want to shorten it, cause those little dimples on my thighs don't need to be shared liberally with the world at large. 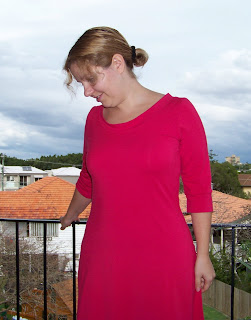 This is the Audrey C Dress from Maria Denmark. I used a bamboo knit with 4% lycra from the Bamboo Fabric Store. I was under the impression I ordered the colour red, but after I washed it it looked definitely hot pink.

I have mixed feelings about this dress ... sigh.

It promised to be such an easy dress, essentially a long t-shirt. The printout of the pattern went together very well, although I had to trace my size with a colour pen as it printed out in light grey. The neckband didn't print out correctly and no matter what I did, it refused ... the joys of technology

However, the fabric was a 4 way stretch not a 2 way as the pattern asked for. I graded out for my larger hips, but it's still a bit tight around my hip/bottom. I made the skirt more A-line and I shortened the arms a little.

This is a rather unflattering picture of my back, but it probably illustrates all my problems with the dress. 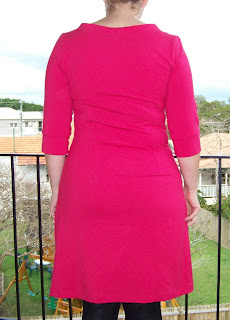 It came out a little small. Either I got the sizes wrong (always a possibility) or the fabric stretched whilst I cut is or even a combination of both. Either way, combined with my least favourite bra and a pair of tights that digs in a little, it is not particularly flattering look on me. However I have a wide belt that I could wear with the dress and thus eliminate at least one of the rolls on the back.

You can't really tell from the picture, but the patterns has 2 back darts and there my fabric choice came back to bite me. I did the darts in a straight stitch, but because it is a 4 way stretch it didn't really work. I had to shorted them and resew them in a small zigzag stitch and then I struggled getting them to lay flat.

I don't know whether I like darts in knit fabric, but since this is the first time I came across them, I am keeping an open mind. My personal preference leans towards adding a back seam and omitting the darts if I make this pattern again.

Finally, after the issue with the darts, which only became apparent once I tried the dress on, I started on the neckband ... ohhh the neckband. I screwed up the neck band REPEATEDLY, no really, this is version 4 and it's staying, I don't care that it is not laying flat. 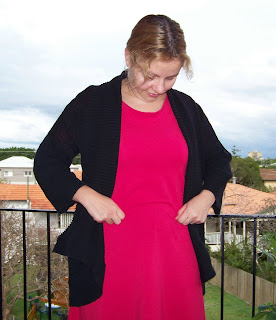 All of the issues are issues that arose with my lack of experience, so overall I think it is a wonderful pattern. I do like the idea of knit jersey dresses, but I mostly wear separates, so I've got to see how much I'll actually end up wearing the dress and see whether I should make anymore :-)
Posted by Giggles at 11:24